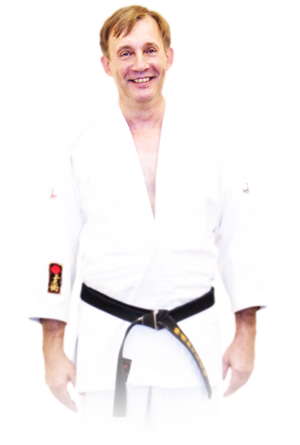 Shihan Thomas Daue started training in the Martial Arts in 1989 at the age of 31 in Berlin, Germany. Looking for a “lifetime” sport after playing for more than 15 years in a regional soccer league, he joined the TSV Gutsmuths Judo academy. His instructor at TSV Gutsmuths was Wolfgang Abraham, 3rd Dan, a national Judo champion. Until 1994 he also trained at the Judo academy “2001” of the Technical University of Berlin under Dr. Wolfgang Weinmann, 8th Dan in Judo who headed also the national German Judo organization.

He immigrated to the USA and settled in Sarasota, FL in 1994. He started training in ShintoYoshinRyu Jiu Jitsu at West Coast Martial Arts Academy under Hanshi Steven Roensch in 1996. He became a full instructor in Jiu Jitsu in 2001 and was awarded the title Renshi in ShintoYoshinKai Jiu Jitsu in December 2005. He continued to be a full instructor in Jiu Jitsu after Shihan Steve Schwartz took over West Coast Martial Arts Academy in 2006. He is one of the founders of Go Dai Henka Jiu Jitsu Ryu.

Thomas Daue trained in Prof. Rick Hernandez’s system Jing Sheng Jie Fang from 2006 until 2012 (Kuntao/Arnis/Baguazhang) under Prof. Hernandez and was awarded Inner Door Student in 2009.  Thomas has found his passion for the Martial Arts in the past 20 years as one of the few lifetime Arts and is dedicated to pass his knowledge to the students of the Academy.